Suits, the legal drama now in its 7th season, is well known for its witty quotes by Harvey Specter, one of the main characters on the series, if not THE main character.  Following are some of his sayings that even me and you can utilize when you’re in a situation needing some resolve:

Which one(s) are your favorites? 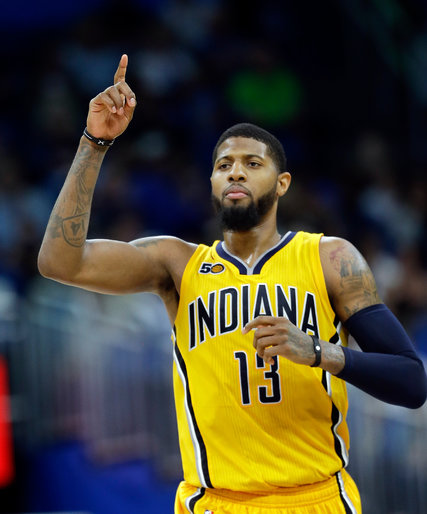 Recently, I was requested by INSPIRERY to do an interview about my career and my story.  It was a fun experience and I hope to follow it up with other sites soon.  Check it out!

Other interviews I have been a part of in the past include:

I came across an interesting article about a former Google employee who taught his fellow coworkers mindfulness and emotional intelligence during his 20% “me” time.   At the end of it, the goal was to teach one to pursue his passions that were unrelated to his or her work responsibilities but that would ultimately benefit the company.  His approach was to recruit other big names in the industry and have them speak (on the company’s dime) with a central message of always doing the right thing for Google and the world.  What he didn’t know was whether or not Google would condone the message or not.  In his words:

He went on: “This is one of those situations where I just do the right thing and then, if it doesn’t work out, just ask for forgiveness.”

What is your secret in the workforce?  My view is that one should always do the right thing for the company.  Shoot first and ask questions later…or firing from the hip can be maverick, but sometimes asking for forgiveness later is the quickest way from point A to point B.  I agree that this won’t work for every employee, but there are definitely situations that warrant this.  Be nimble and flexible, and use an agile, well thought out approach for every situation. 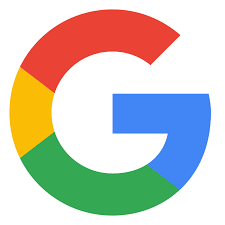 I read a recent article about rethinking how you manage that really piqued my interest.  When there are issues to be resolved and decisions to be made in the workplace, it takes a certain level of effort to get the job done.  I’ve been on both sides of the equation here — as an employee who has reported to a superior and as a manager with direct reports.  And because of this, I know that there can be different solutions taken that arrive at the same answer.  However, some solutions may be more or less efficient or effective than others.  Knowing how to effectively communicate, either employee to boss or vice versa, is important here.  The key to resolution is ownership — if one feels they are vested in the project or the issue at hand, they’ll take on responsibility and see the task to completion.  On the flip side, if there are always questions but no proposed solutions, or if one’s solutions are always discounted, there can be no real ownership.   It’s all about the appropriate level of employee empowerment! 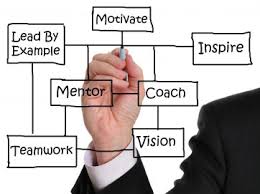 A recent article about Apple’s interview questions was really interesting which got me thinking — as a manager, I’ve never been asked questions like this before during an interview.  I ask the typical questions about who you are, where you’ve been and what are you up to now.  I’ll usually ask a few questions to make the interviewee think, such as what is your favorite excel formula and why?  Or ask them to describe a situation that had conflict and see how they resolved it.  But it dawned on me that there is a whole other creative way to glean information from a candidate and Apple seems to have it down pat.   There are some pretty challenging questions in this article.  How would you answer them?

Following are some of them:

“We have a cup of hot coffee and a small cold milk out of the fridge. The room temperature is in between these two. When should we add milk to coffee to get the coolest combination earliest (at the beginning, in the middle, or at the end)?” —Product Design Engineer candidate

“How much does the Empire State Building weigh?” — Solutions Consultant candidate

“How do you check if a binary tree is a mirror image on left and right sub-trees?” – Research scientist candidate

“What superhero would you be and why?” – Retail candidate

“Explain what RAM is to a five year old.” — Apple Genius candidate

“How does an airplane wing work?” — Lead Systems Engineer candidate

“Give me 5 ways of measuring how much gasoline is in a car.” — Hardware Engineering candidate

“If you have 2 eggs, and you want to figure out what’s the highest floor from which you can drop the egg without breaking it, how would you do it? What’s the optimal solution?” — Software Engineer candidate

“How would you break down the cost of this pen?” — Global Supply Manager candidate

“Describe an interesting problem and how you solved it.” — Software Engineer candidate

“Explain to an 8 year old what a modem/router is and its functions.” — At-Home Advisor candidate

“How many children are born every day?” — Global Supply Manager candidate

“You have a 100 coins laying flat on a table, each with a head side and a tail side. 10 of them are heads up, 90 are tails up. You can’t feel, see or in any other way find out which side is up. Split the coins into two piles such that there are the same number of heads in each pile.” — Software Engineer candidate

“How would you test your favorite app?” — Software QA Engineer candidate

“There are three boxes, one contains only apples, one contains only oranges, and one contains both apples and oranges. The boxes have been incorrectly labeled such that no label identifies the actual contents of the box it labels. Opening just one box, and without looking in the box, you take out one piece of fruit. By looking at the fruit, how can you immediately label all of the boxes correctly?” — Software QA Engineer candidate 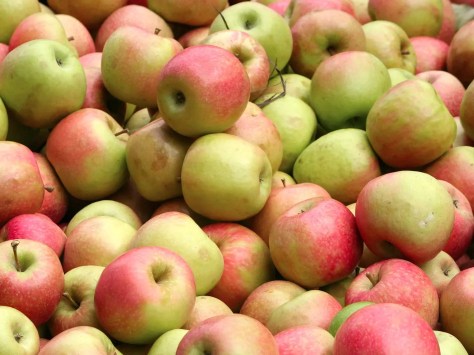 “Scenario: You’re dealing with an angry customer who was waiting for help for the past 20 minutes and is causing a commotion. She claims that she’ll just walk over to Best Buy or the Microsoft Store to get the computer she wants. Resolve this issue.” — Specialist candidate

The San Francisco 49ers have had an interesting yet fantastic offseason.  Just when we thought there was no way the 49ers could have four head coaches over the last four years, they go out and sign offensive coordinator Kyle Shanahan from the Atlanta Falcons, shortly after signing on a new GM in former safety John Lynch.  Generally, rookie GM’s find it challenging in all aspects during their first campaign at the helm, but this year’s draft has proved otherwise.  Coming off of their worst season in NFL history where they went 2-14, the 49ers earned the #2 pick in this year’s NFL draft.  Held over the last 3 days, following is the list of final picks:

What is most interesting is the wheeling and dealing that occurred right out of the gate.  After the Cleveland Browns selected Myles Garrett at #1, the Chicago Bears traded their #3 pick for the Niners’ #2 pick, as well as for pick 67 in Round 3 and pick 111 in Round 4.  On top of that, the Niners received a 2018 third-round pick.  Interestingly, the Browns selected Mitch Trubisky, quarterback from North Carolina, leaving Solomon Thomas, DT from Stanford, as the #3 pick for the Niners!  Solomon Thomas was who they wanted to begin with, so the Niners started off the draft with a bang and a steal! 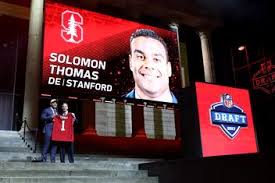 Shortly thereafter, the Niners traded their 34th pick (Round 2) and their 111th pick that they just acquired, to Seattle, in order to draft arguably the best LB in the draft in Alabama’s Reuben Foster.  When the smoke had cleared, the Niners had just drafted two of the top 3 players on their board.  Remarkable! 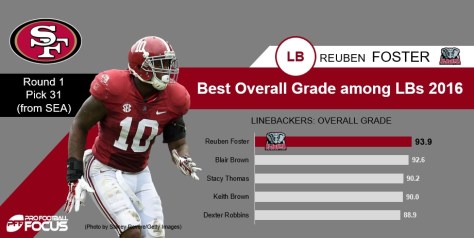 Can’t wait for the season to start – go Niners!