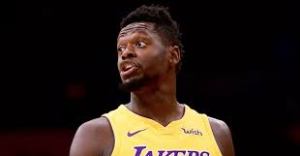 Although the Lakers haven’t made the playoffs since the 2012-13 season, they’ve been struggling to maintain their previous status as a team to be reckoned with. Julius Randle, who joined the team a year after that aforementioned season, says  the team has been taking big steps forward in its development.

In the article below, he goes into why they are starting to command respect  and why this competitive team can’t be overlooked by the rest of the league any longer. What do you think?