Most individuals at some point in their life have had the desire to become successful.  Whether that is due to their financial worth, their position at a company, or their overall status, in terms of how others may perceive them.  It isn’t until you’ve experienced things like failure, setback or hardship, that one fully begins to understand and embrace life, especially after having achieved success in the past.  When you’ve had it, you’re on top of the world and nothing can take you down.  But when you’re not careful, things can come crashing down in an instant.  Importantly, perhaps the way to become successful is not for the extra zero, or for the promotion, or for the press — but rather seeking to merely be valuable with no expectation in return.  Valuable to others, including your family, in the workplace, amongst your friends, or at church.  Inherently, you will be a man of success. 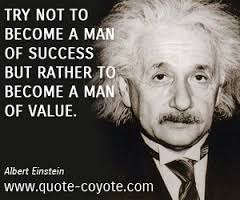