Just last season, we witnessed Kobe Bryant’s worst statistical season ever.  But we won’t forget the 5 rings he won as an LA Laker.  I’ll take the peaks and valleys because despite what anyone says, he was interesting and polarizing as a player.  While equally frustrating along the way, Kobe gave the Lakers everything he had night in and night out and for that, will be remembered as one of the best to ever suit up.  Kobe was one-of-a-kind.  We will never see another Kobe Bryant in our lifetime. 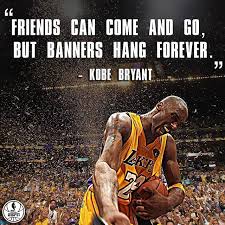 “Friends can come and go, but banners hang forever.”