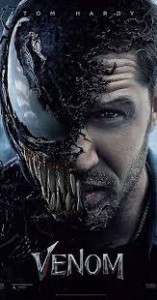 Marvel Comics’ most notorious villains is now immortalized in the latest Venom movie, based on the popular Spider-Man spinoff character. This action-packed trailer showcases the film’s wild alien effects and it looks to be a blockbuster.

Hitting theaters in just a few days — October 5 — Venom will feature The Dark Knight Rises star Tom Hardy as Eddie Brock, a journalist who is the host of a powerful, symbiotic alien that provides him superhuman abilities.

I know where I’ll be this weekend!